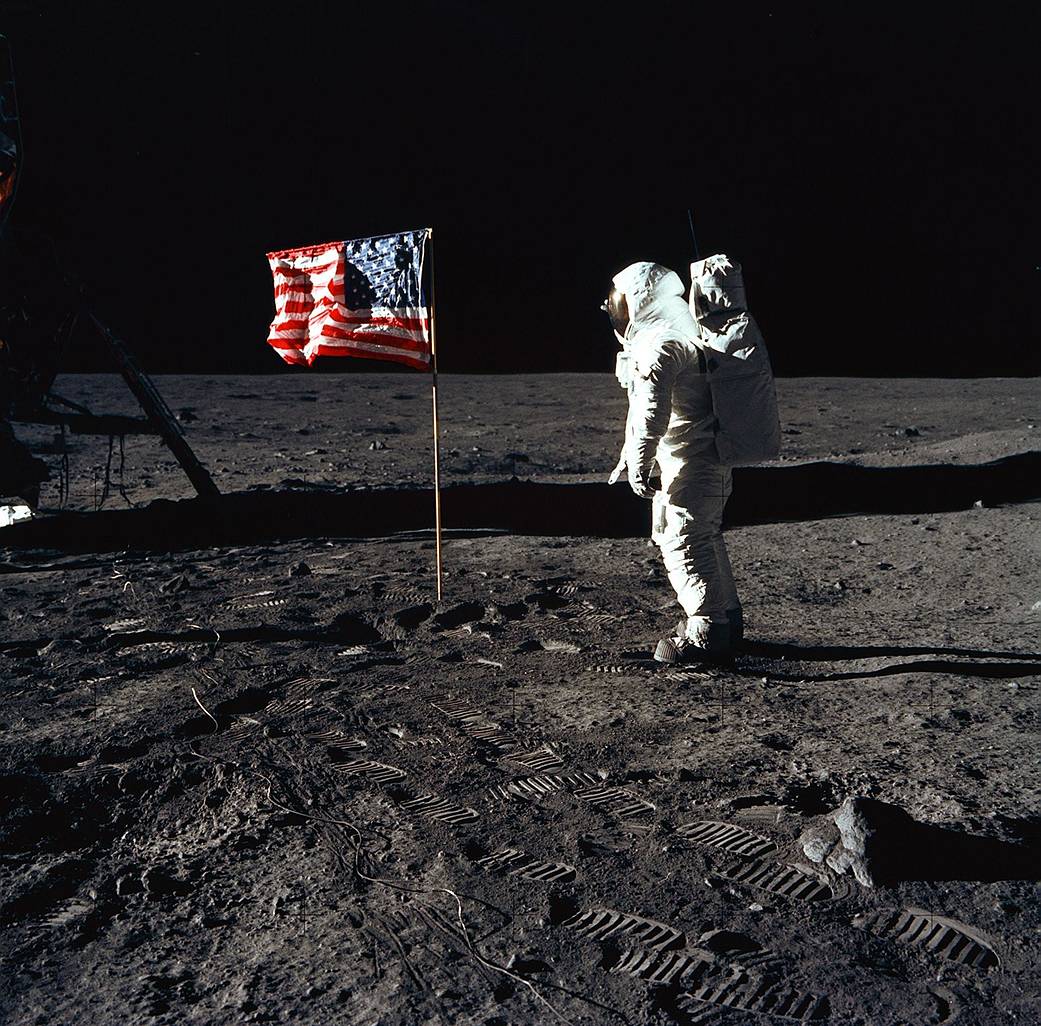 AS11-40-5875 (20 July 1969) — Astronaut Edwin E. Aldrin Jr., lunar module pilot of the first lunar landing mission, poses for a photograph beside the deployed United States flag during an Apollo 11 extravehicular activity (EVA) on the lunar surface. The Lunar Module (LM) is on the left, and the footprints of the astronauts are clearly visible in the soil of the moon. Astronaut Neil A. Armstrong, commander, took this picture with a 70mm Hasselblad lunar surface camera.

I was 9 years old in 1961, the year President John F. Kennedy set the sights of Americans on an amazing dream, going to the moon within a decade.  Not everyone thought it was possible.  Backed then we followed the progress of NASA and as a monkey, Albrect II was the first earth creature to break from earth into space.  February 20, 1962 John Glenn in Friendship 7 orbited the earth, in a capsule with less electronics than our average cell phone.  Seven years after Glenn’s amazing flight, NASA launched Saturn V rocket from the Kennedy Space Center,  Florida.

I was 17, and we watched the moon landing on our black and white television.  The image was grainy, but these were images from the moon!  The United States of America did it!  We sent a man to the moon.  The Eagle, as the landing vehicle was called, had landed!

Commander Neil Armstrong took slow careful steps down a ladder to the surface of the moon.  As he stepped down onto the lunar surface he said the famous line, “One small step for [a] man, one giant leap for mankind.” We cheered, as I am sure household around the country did.  Some people, like Hubby, took pictures of their television screens, and these grainy, shadowy pictures remain among their most cherished possessions.

Pilot Edwin “Buzz” Aldrin joined Armstrong on the surface of the moon, while Michael Collins piloted the command module.  We were mesmerized as our flag was placed.  We were amazed by the steps taken in a fraction of our gravity.

It was our country who was the first to do this amazing thing, and we were proud.  Not only were we proud, but the entire world was proud.  Man had made it to the moon.  Mankind was reaching out into space!

We thought our country was great then.  Many of us still think our country is great.  Maybe the problem isn’t how great the country is, but that our goals have just gotten smaller.